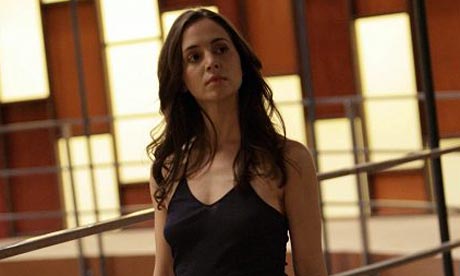 What happened when the lights went out. Sadly, this is not a naughty post. It’s just Joss nattering on again.

I thought it was time to check in with you once again, gentle viewers. Or readers. Or pictures-looker-ats (that might be viewers). Also listeners, sniffers, haberdashers, Olympic hopefuls, the elderly, the youngerdly, and the mighty state of Oregon (go Oregon-based sports franchise!) Welcome all. Welcome… to me.

What’s me up to? I’m glad me asked. Me’ve (I’m not doing that any more) been working on a little show called Dollhouse. Yes, perhaps you’ve read about how it’s blazing an untrammeled path to surefire success, with nary a hitch or a hiccup, just pure blazing blazery, comet-like and meteoresque. What’s that, you say? You’ve read other things? Dark, Yog-Sothothy rumors about shutdowns and delays? Poppycock! They’re true. But I never pass up a chance to say “poppycock”. (“Balderdash” is so ’07. Let it go.) I know there’s been a lot of concern, various fabulous hues of panic alert readiness. So here’s the skinny. Some of the names have been changed.

The show was ruined by Flim Flinear. Okay, that’s another lie, and you’re probably close to giving up on this blog, so here we go. Yes, we’ve had to make adjustments. Yes, it’s been hard and I’ve been depressing to be around for awhile. Basically, the Network and I had different ideas about what the tone of the show would be. They bought something somewhat different than what I was selling them, which is not that uncommon in this business. Their desires were not surprising: up the stakes, make the episodes more stand-alone, stop talking about relationships and cut to the chase. Oh, and add a chase. That you can cut to. Nothing I hadn’t heard before on my other shows (apparently my learning curve has no bendy part) but frustrating as hell given our circumstances – a pilot shot, scripts written, everybody marching together/gainfully employed… and then a shutdown. Glad I was for the breathing room, but it’s hardly auspicious. So back into the writer cave I went, wondering why I put up with this when I can make literally dozens of dollars making internet movies. Why I do put up with this is divided into three parts.

One: They’re not wrong. Oh, we don’t see eye-to-eye on everything, but wanting the first episodes to be exciting and accessible is not exactly Satanic. Being Satan is, but that’s in their free time and hey, there’s no judging in the Dollhouse. This kind of back and forth has happened on every show I’ve done, so if you liked those, chances are that was a part of why. And the need to focus on the essentials of what makes this universe tick – and which wire to cut to make it stop – really does bring up our game. So we as a staff have gone from blinking like unhoused moles to delving in with the same relish we had when we started. The show is really coming together now, in a way that I believe excites us and satisfies the Network. Of course, I have no idea if anybody else will like it, but I have the same faith in the staff, the crew and the remarkable cast that I always did. More, in fact. And what’s more crucial:

Two: Nothing essential has changed about the universe. The ideas and relationships that intrigued me from the start are all there (though some have shifted, more on that), and the progression of the first thirteen eps has me massively excited. The episode we’re shooting now I wrote as fast as anything I have before, not because I had to (although, funny side-note: I had to) but because I couldn’t stop the words from coming. Because I can feel the show talking to me; delighting, scaring and occasionally even offending me. It’s alive. Alive! Which is a far cry from how I felt a month ago. It’s been hilarious trying to keep up with what’s in, what’s out, who’s met whom and when – we’ve shot all of the first seven episodes out of airing order – but it’s come together in a pretty thrilling way. My huge gratitude to our cast for their precision and patience. Which also includes…

Three: Eliza. Watching her on the monitors at two o’clock this morning I was reminded forcibly how much I wished I were in bed – but also how strong, radiant and unmistakable her presence is. She’s someone who could coast on talent and never ever does. I love to watch her work. In fact, I think I got myself into this mess for that very reason, and though I have this fall occasionally sworn never to eat lunch with an actor I like again, I’m pretty pleased and crazy proud.

So here’s me, slogging away on a show like days of old and not hating life. Again, you guys will be the judge, jury and execu… lawyer, but we do have something to show you. Something, I’m chuffed to say, still pretty damn strange.

As for what’s been changed, well, some things I obviously can’t tell you. Some I can, for the record: The original pilot was in fact thrown out. Again, at my behest. Once it became clear what paradigm the Network was shooting for, it just didn’t fit at all, even after I’d reshot more than half of it (see above re: despair). To get a sense of how completely turned around I was during this process, you should know there was a scene with Eliza and the astonishing Ashley Johnson that I wrote and shot completely differently three different times, with different characters in different places (actually I wrote it closer to eight times), and none of it will ever see air. Which is as it should be (though I’m determined to get Ms. Johnson back in the future). The scene just didn’t belong anymore. Similarly, the character of November has fallen out of the mix, because the show simply moves too fast now for me to do what I wanted with her. Season three, anyone…? Happily, Miracle Laurie is still with us in a new role, playing against (and pining for) Tahmoh’s character, Paul Ballard. Their chemistry is deeply nifty. The only other major cast shift is that the Dollhouse head of security, Laurence Dominic (played by Reed Diamond), who was written just for the now-defunct first ep, has stuck like fly-paper, and Reed is very much in the family for the present. (Most of my problems seem to involve my actors making themselves indispensable. This is the good problem kind.)

Apart from that, it’s all hush-hush: some things I’d intended to hold back are laid out much sooner, and some are rolling out more slowly. We’re still heading toward Tim’s intense two-part mind-blower – right before a thirteenth ep that may actually just be insane.

And finally, young Steve DeKnight, after writing and shooting an ep so cool it helped not only define the show but save its ass, is ending his consulting duties, the f#%&er. I will be crying on the shoulder of Jane Espenson come Monday, so congratudolences are in order. Excited for the Jane Flava.

And there you have it. I’ll be writing more bulletins about “Cabin” and a certain DVD in the very near future, but I wanted to get you all some actual information for a change. I can count on you guys not to tell anyone, right? What’s a blog?

I just f*cking love Whedon. Give me my Dollhouse, now! No… as a matter of fact, sooner than now.

fuck the fox network. fuck them up their stupid asses.

A link kattintása előtt ki gondolt rá?
Wherever you are right now, get up, stop the work. Get out of your cells, take charge and start climbing. They don't have enough guards and they know it. If we wait until they figure that out, it'll be too late.