– What is it?
– It’s a script of a fake commercial at the end of season six, starring this family. Sorry, dad. Guess I win.
– You stupid child. Nobody’s winning anything. Don’t you see? This means we don’t exist. We’re not created by God,
we’re created by a joke. We were never born, and we will never actually live.

Dice not included. Some assembly required. Lines between perception, desire, and reality may become blurred, redundant, or interchangeable. Characters may hook up with no regard for your emotional investment. Some episodes too conceptual to be funny. Some too funny to be immersive, and some so immersive they still aren’t funny. Consistency between seasons may vary. Viewers may be measured by a secretive obsolete system based on selected participants keeping handwritten journals of what they watch. Show may be cancelled and moved to the Internet, where it turns out tens of millions were watching the whole time, may not matter. Fake commercial may end with disclaimer gag which may descend into vain Chuck Lorre-esque rant by narcissistic creator. Creator may be unstable. Therapist may have told creator this is not how you make yourself a good person. Life may pass by while we ignore or mistreat those close to us. Those close to us may be those watching. Those people may want to know I love them, nut I may be incapable of saying it. Contains pieces the size of a child’s esophagus.

– Shirley could get us back on formula, but I don’t see it turning us around.
– Sorry, what’s our formula?
– Well, basically. I have a placeholder so set up it, makes analogies look like punchlines.
– My setup lacks awareness, but my punchline doesn’t know.
– Abusively cynical one liner dismissing everything you just said.
– Absurd reaction.
– You guys, can we put a pin in the B story and focus on the A story?
– I don’t trust A stories. Never have, never will. I had a set up about a story that was so placeholder, the punchline came five words early. And I can tag it too.
– Ooh.
– I’ll just take a moment to explain the risks involved in all decisions made from here until eternity.
– Who the hell are you?
– I’m Frankie Dart.
– Is this combination gonna work?
– Not my place to say.
– Abed?
– Lizard. Fire hydrant. Obama. Shane!
– You know, I put time into what I do wardrobe wise.
– Yeah see, Shirley, no Shirley, what does it matter, right?
– Abed, we’re not formulas, and if I had no self-awareness, I think I’d know.
– Things have a certain structure to them, you know? If we stray from it, we’re weird, if we stick to it, we’re boring.
– Yeah, but isn’t that more about the shape of your brain, Abed? I mean, no offense or anything.
– But isn’t the shape of your brain kinda fucked up?
– Hm. What’s your season seven pitch? Shirley or Elroy?
– That’s racist.
– How about they both come back?
– How about there’s a whole third black person?
– Where do they all sit? 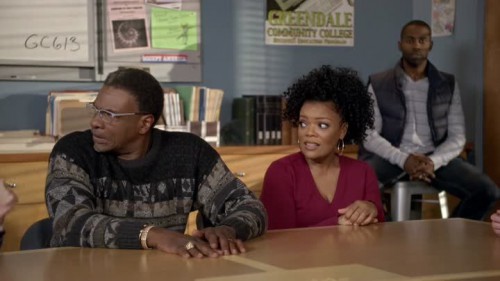